Would you like to switch to the accessible version of this site?

Don't need the accessible version of this site?

Chiropractic is a branch of the healing arts which is based upon the understanding that good health depends, in part, upon a normally functioning nervous system (especially the spine, and the nerves extending from the spine to all parts of the body). “Chiropractic” comes from the Greek word Chiropraktikos, meaning “effective treatment by hand.” Chiropractic stresses the idea that the cause of many disease processes begins with the body’s inability to adapt to its environment. It looks to address these diseases not by the use of drugs and chemicals, but by locating and adjusting a musculoskeletal area of the body which is functioning improperly.

The examination of the spine to evaluate structure and function is what makes chiropractic different from other health care procedures. Your spinal column is a series of movable bones which begin at the base of your skull and end in the center of your hips. Thirty-one pairs of spinal nerves extend down the spine from the brain and exit through a series of openings. The nerves leave the spine and form a complicated network which influences every living tissue in your body.

Accidents, falls, stress, tension, overexertion, and countless other factors can result in a displacements or derangements of the spinal column, causing irritation to spinal nerve roots. These irritations are often what cause malfunctions in the human body. Chiropractic teaches that reducing or eliminating this irritation to spinal nerves can cause your body to operate more efficiently and more comfortably.

Chiropractic also places an emphasis on nutritional and exercise programs, wellness and lifestyle modifications for promoting physical and mental health. While chiropractors make no use of drugs or surgery, Doctors of chiropractic do refer patients for medical care when those interventions are indicated. In fact, chiropractors, medical doctors, physical therapists and other health care professionals now work as partners in occupational health, sports medicine, and a wide variety of other rehabilitation practices.

The Big Idea of Chiropractic

Over 100 years ago, D.D. Palmer (the Founder of chiropractic and Palmer College of Chiropractic) had a “big idea” – the idea that good health can be sustained naturally, without drugs or surgery, through chiropractic care. Today, chiropractic is the second largest licensed health care profession. 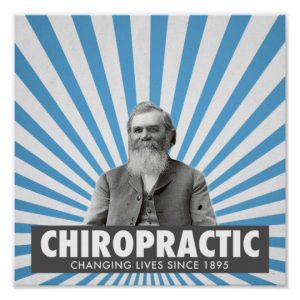 Chiropractors use natural, drugless, non-surgical health care and rely on the body’s ability to heal itself. Like other health practitioners, chiropractors follow a standard routine to secure the information needed to determine how to care for their patients. They take the patient’s medical history; conduct physical, neurological and orthopedic examinations; and may order X-rays.

The History of Chiropractic

The first recorded chiropractic adjustment was performed on September 18, 1895, more than 100 years ago, by Dr. Daniel David Palmer, a teacher and healer who was born in Port Perry, Ontario. At the time, Dr. Palmer was trying to understand the cause and effect of disease. The patient, Harvey Lillard, was a janitor working in the same building as Dr. Palmer in Davenport, Iowa. Mr. Lillard had been bent over under the stairs, hurt his back and had complained of hearing problems as a result for over 17 years. He allowed Dr. Palmer to examine his spine to see if anything could be done. Dr. Palmer discovered a “lump” on Mr. Lillard’s back and suspected that a vertebra might be out of “alignment” and “pinching” a nerve going to Mr. Lillard’s ears. With an admittedly unrefined chiropractic technique, Dr. Palmer adjusted the vertebra with a gentle thrust. After several such treatments, much of Mr. Lillard’s hearing was restored.

This dramatic beginning caused much excitement. Soon exaggerated claims surfaced from activists and chiropractic zealots. Even Dr. Palmer himself thought at first that he had discovered a cure for deafness. As these “miracle” stories became commonplace, the controversy surrounding chiropractic began. While it might have been reasonable for chiropractors and their patients to assume major diseases had been “cured”, in many cases the problem was an error in the original diagnosis. The doctor making the diagnosis may have assumed the patient had a heart problem when in fact the pain in the patient’s chest resulted from a rib sprain, not a heart problem.

One of Dr. Palmer’s patients, a minister, is credited with creating the name “Chiropractic” for this new art and science of manipulation. He took the Greek words for “hand” (cheiros) and “done by” (praktos) and put them together to create Chiropractic, meaning “done by hand”.

Without the leadership of the founder’s son, Dr. Bartlett Joshua (BJ) Palmer, chiropractic might not have survived.

But survive it did. Chiropractic has rapidly grown to be third only to medicine and dentistry as the largest primary health care provider in the western world. The original Palmer College of Chiropractic in Davenport, Iowa grew from 24 students in 1906 to 3,100 in 1923. Today, there are more than 23 chiropractic institutions throughout the world, including colleges in Canada (Toronto, Trois Rivières), the United States, Australia, Japan, and England. Current enrollment at chiropractic institutions now exceeds 10,000 enthusiastic and dedicated students.

We look forward to hearing from you

Find us on the map